Not many people know this,  but the boss at Hot Gem – Clair Crawford is originally a jewellery designer and silversmith, the name ‘Hot Gem’, was not only inspired by the idea of finding hidden gems in music, but in a general sense of beautifully created art.  Many of the artists Clair has worked with at Hot Gem are inspired by magick and nature, so we thought it apt to showcase this work here

‘I’d really missed creating things, so I  promised myself in 2018 I’d fill the creative void by working on a silver jewellery collection.

a compact selection of ‘telos’, objects used to focus on whilst harnessing energy, whether it be via meditation, magick, sex magick or visualisation.

‘She’s also started a collection inspired by historical tales of friend’s family, pieces which not only have a story behind them, but  include a little piece of that physical history in each piece.

FOR ALL SALES ENQUIRIES HIT CLAIR UP ON clair@hotgem.co.uk 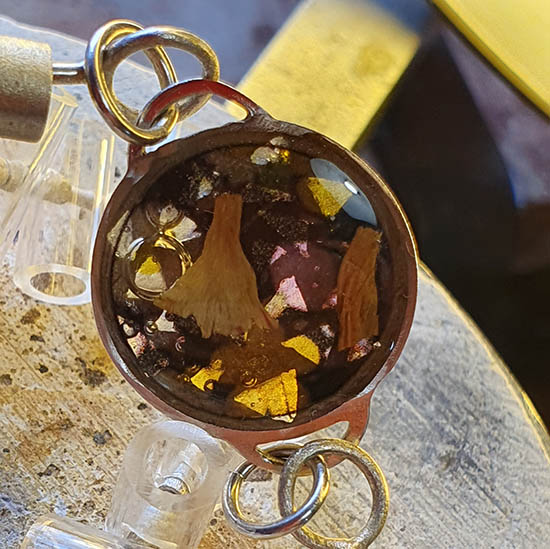 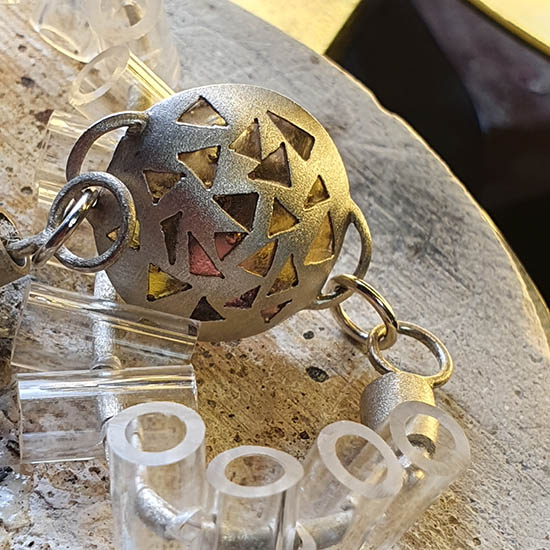 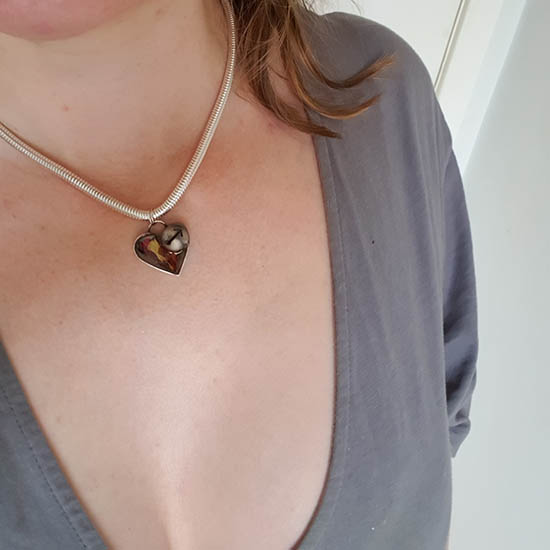 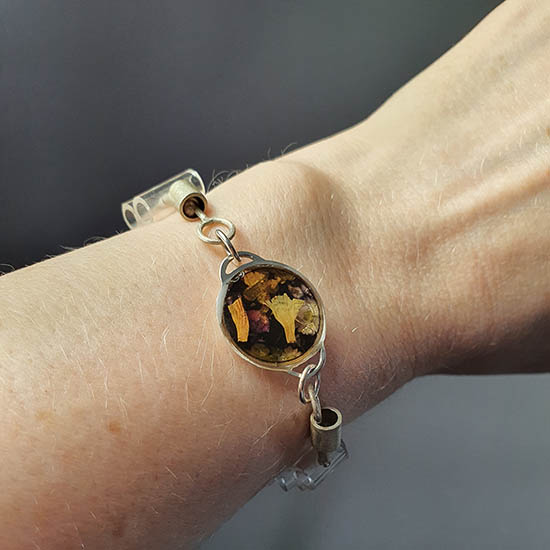 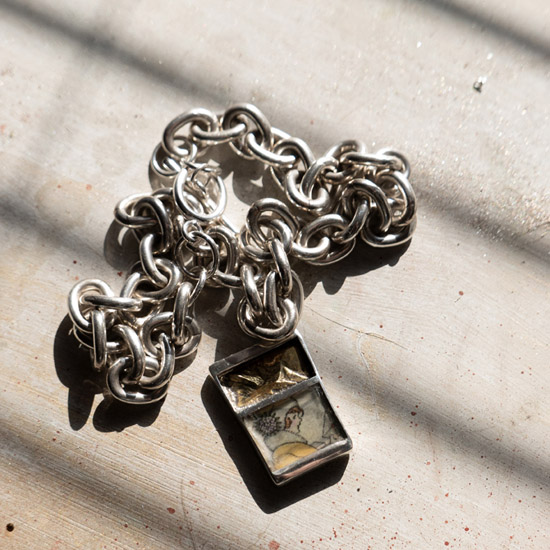 Ivy No.1 comprises of a heavyweight choker length chain and pendant. The pendant is made from solid silver and brass, combined with a one off copy cutting of a  1920s postcard embedded in resin within with the silver frame.
Price: £325.00 (+p&p) 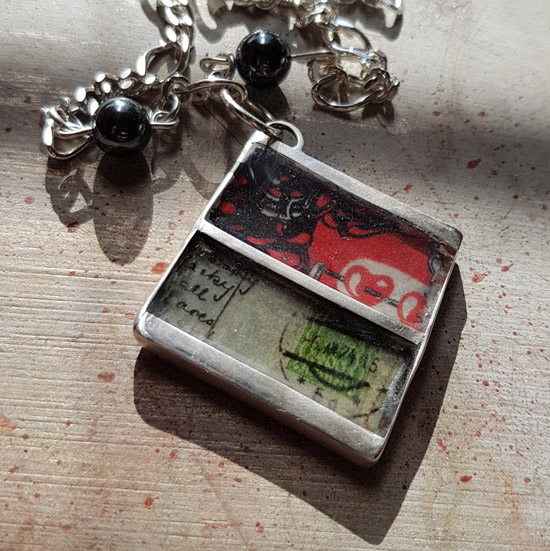 Ivy No.2  is made from solid silver featuring one off postcard copy slices from 1920s postcards embedded in resin.

The idea behind  the aesthetic of these came from a dream of finding little pieces of battered valuable history collected in a magpie’s nest, magpies like to collect shiny things. Both of these pieces contain one off copies of postcards which  belong to a close friend of Clair’s, who’s  great-aunt Ivy began working as a nanny for a wealthy Swiss family. Over the course of 1924-28 she sent many postcards back to her parents in Norwich from places like Switzerland, Austria, Romania and Marienbad (modern-day Czech). Via his grandmother they  found their way into his possession, nearly 100 years later, in perfect condition. A magnificent strong woman who never married, she lived to her 80s – a true inspiration <3 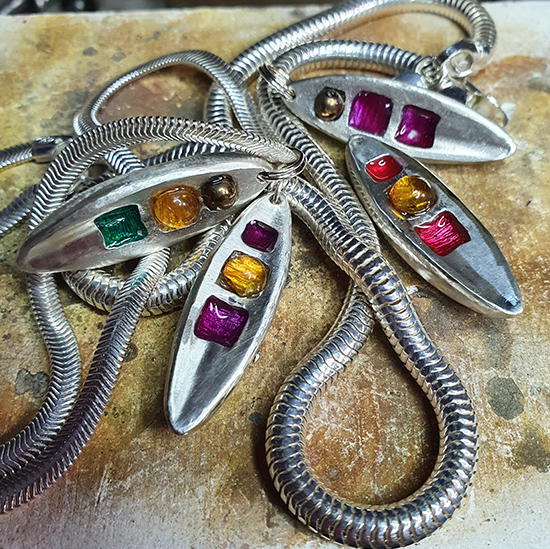 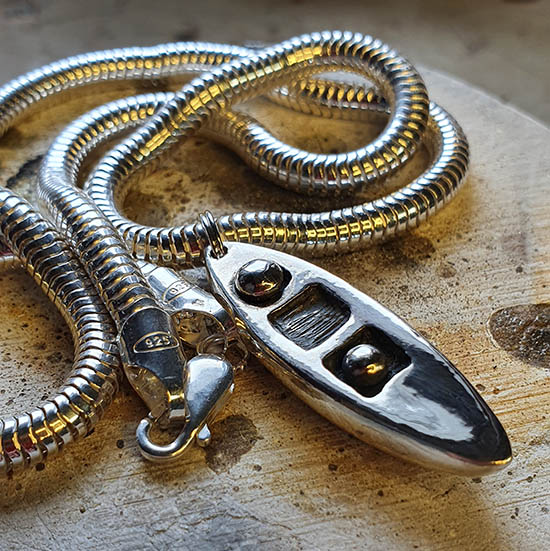 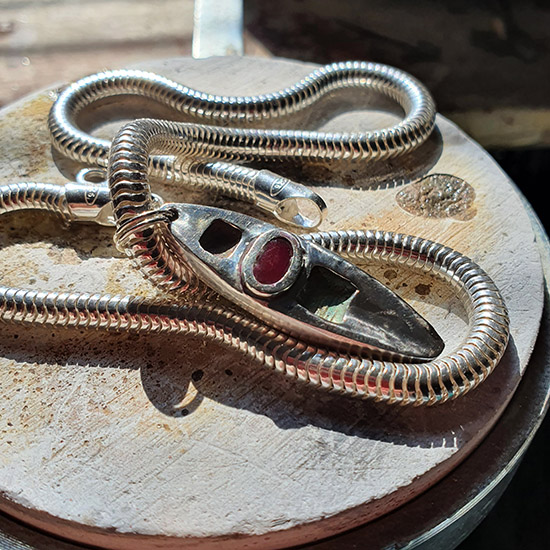 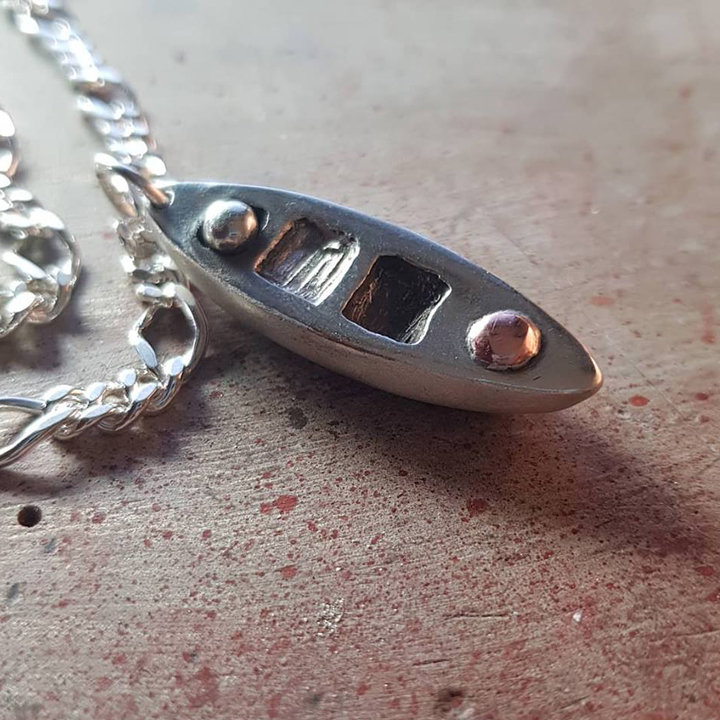 Use if your wish is travel, focus on it, visualise, use a mantra, use sex magick to harness energy, place yourself where you want to be, or just wear it caus it looks cool as fuck. A very limited edition availability, the silver pendant weighs in 20.4 grams, and can come with different sizes and kinds of chain. I make each little boat with a tweak, so each one is individual.
Chain can come in light, longer or heavier chain, message for details, personally loving snake chain right now, pictured on the left with the  blood resin antique boat. 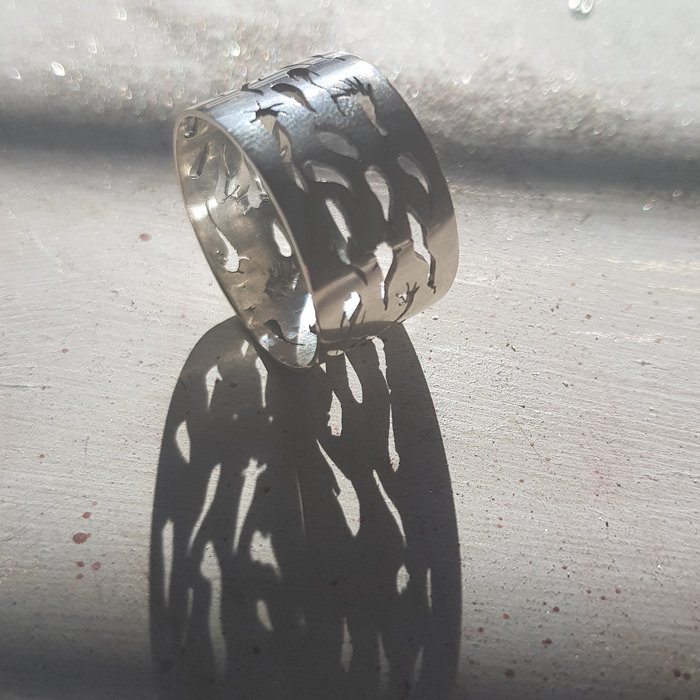 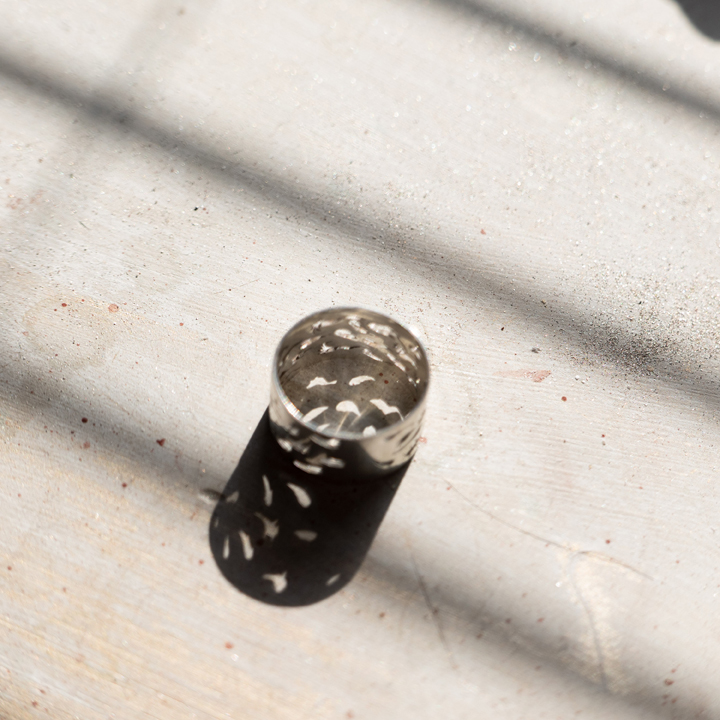 Go deep enough and you’ll find an what seems to be an alien planet, a different world, dive deep into your consciousness you’ll no doubt find something other worldly, every molecule in this world is connected. Meditate long and deep, I use transcendental meditation. Only a couple of these available as it stands, no two are the same, msg for details. 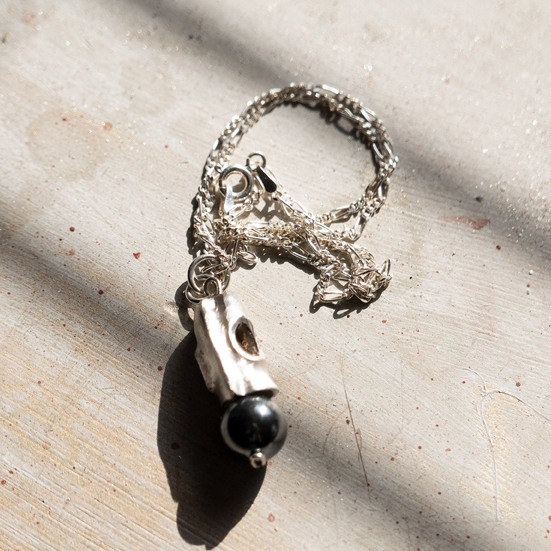 Telos object no.2  – ‘Magic bark’
Use the magical bark for healing, create your healing spell, visualise strength and health, again, focus on it, visualise, use a mantra, use sex magick, see yourself or a loved one well and how you want them or you to be. <3  or just wear it caus it’s cute anyways.  Chain can come in light or heavier chain, message for details. 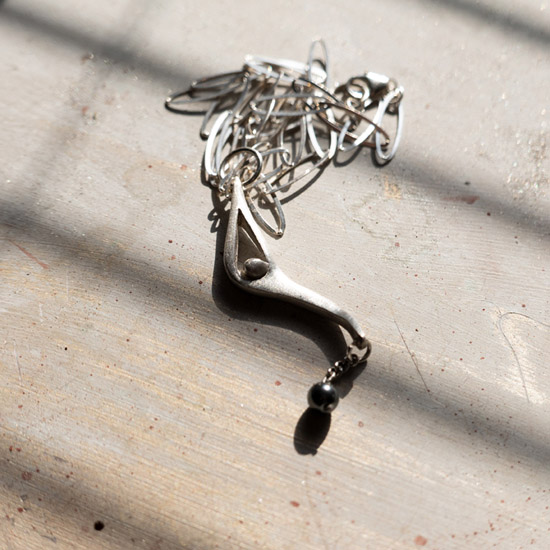 Inspired from the urdhva hastasana yoga pose. this is one for focusing on peace and inner strength – we’re all dealing with the every day constant background white noise on top of all the stresses and anxieties, the best way to cope is to take time out and work on your peace of mind and inner strength, let go and centre yourself, salute to the sky with this telos. Chain can come in extremely lightweight oval or heavier figaro chain, message for details. 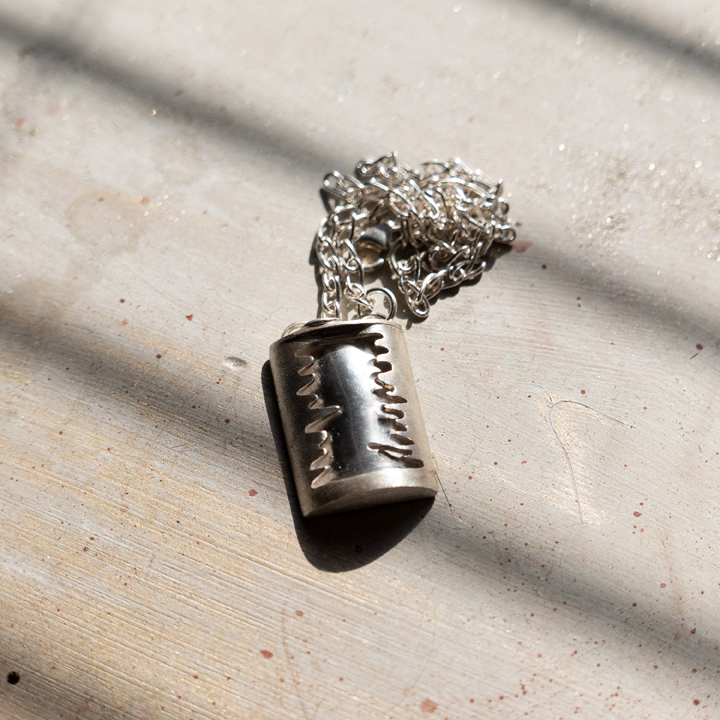 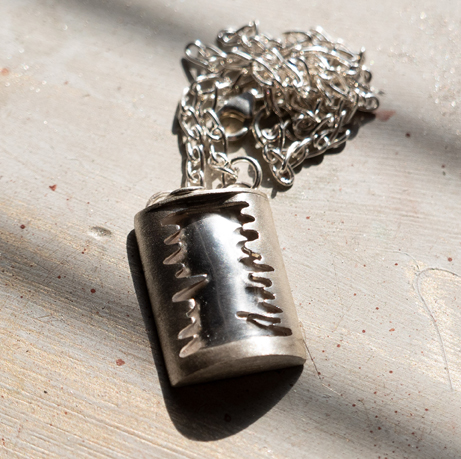 Telos oject no.4 –  ‘Wave pendant ‘
Sine waves and sea waves, flowing and ebbing sounds and energy, use this telos to create, meditate for long enough you’ll hear music being created around you, can come in light or heavier chain, message for details. 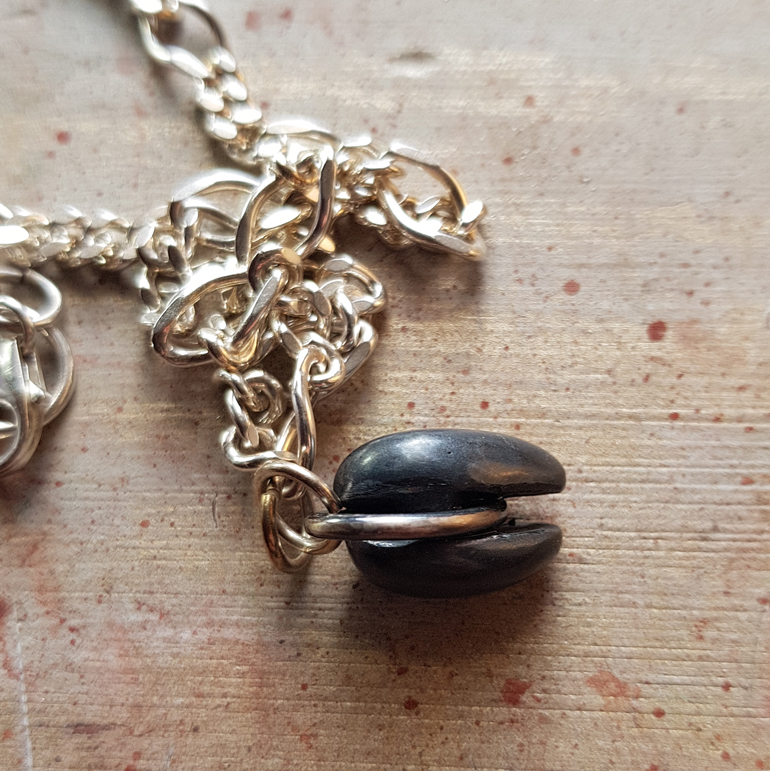 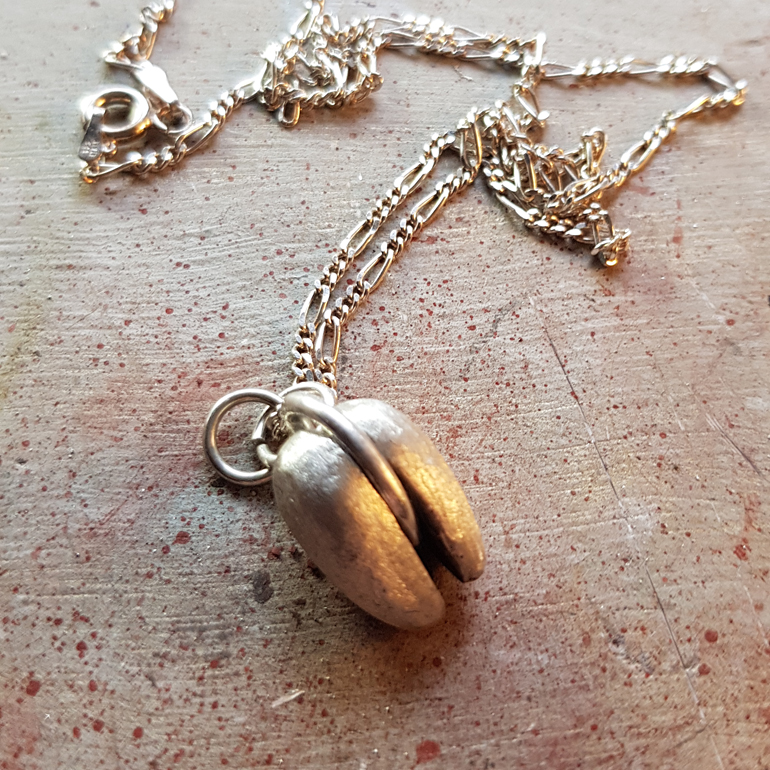 Telos object no.5 –  ‘cocoa (cacao) bean pendant ‘
Inspired by the cocoa (cacao) bean, feel  sexually energised and coveted with the use of this telos, comes in blackened silver and satin finished silver, again a limited edition piece, can come in light or heavier chain, message for details. 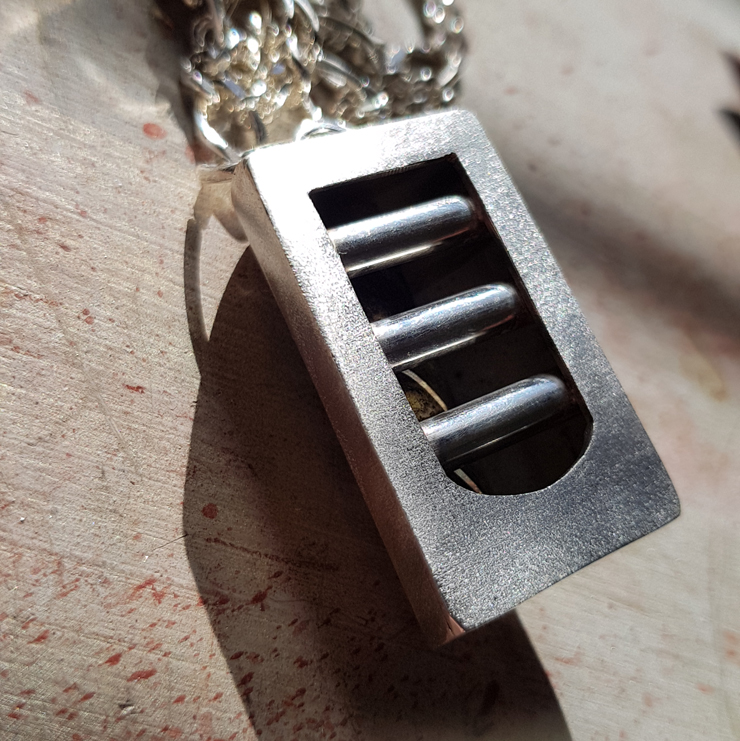 Telos object no. 6 – Protection telos
Use this telos to for a protection spell, keep your loved ones safe, you’ll never lose this telos or whoever is wearing it, as it’s a little bell. 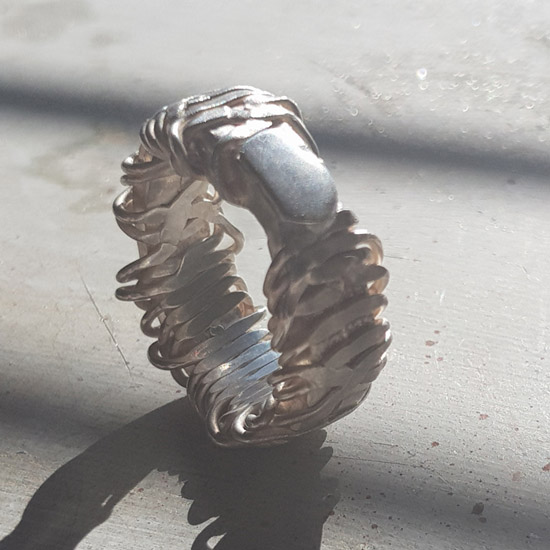 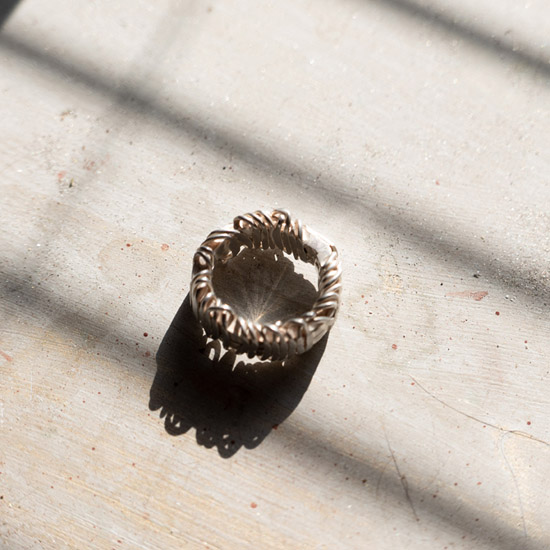 A super-food full of minerals and protein, seaweed is one of the  many treasures the sea provides us with, let’s take care of our oceans before all the plants and fish are poisoned, and we can no longer reap the benefits, already our fish our full of heavy metals due to the environmental damage we are causing. Go check out new beach cleaning projec ‘Remote cleansing crew‘ to to see what these guys are up to.

This ring is solid silver, a larger size at a U, it weighs in at a heavy 20.9 grams 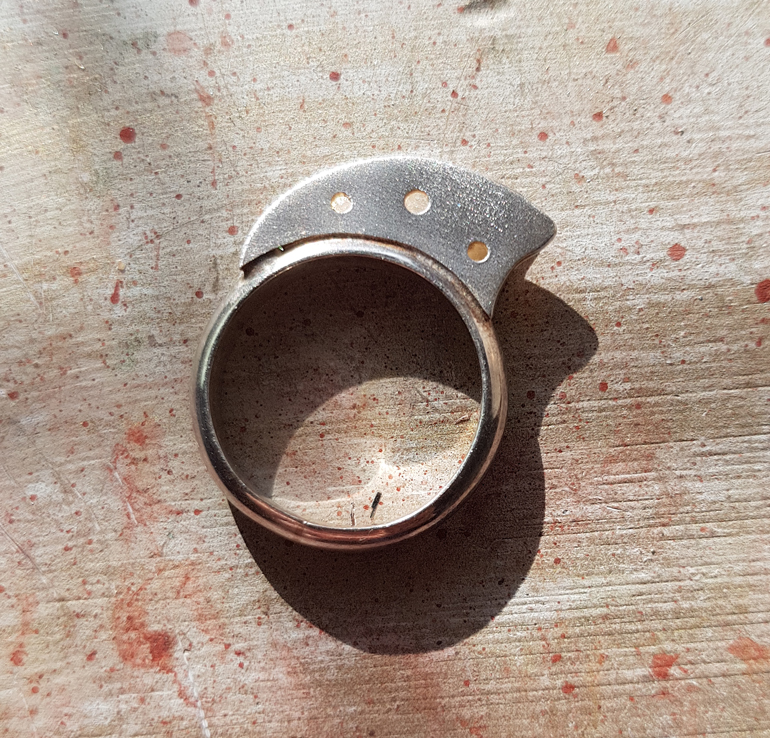 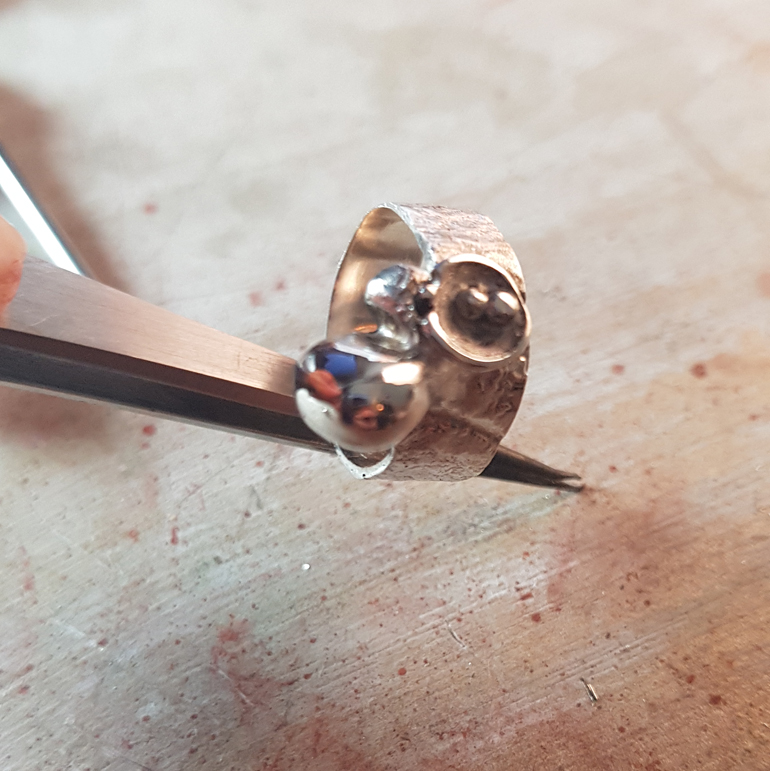 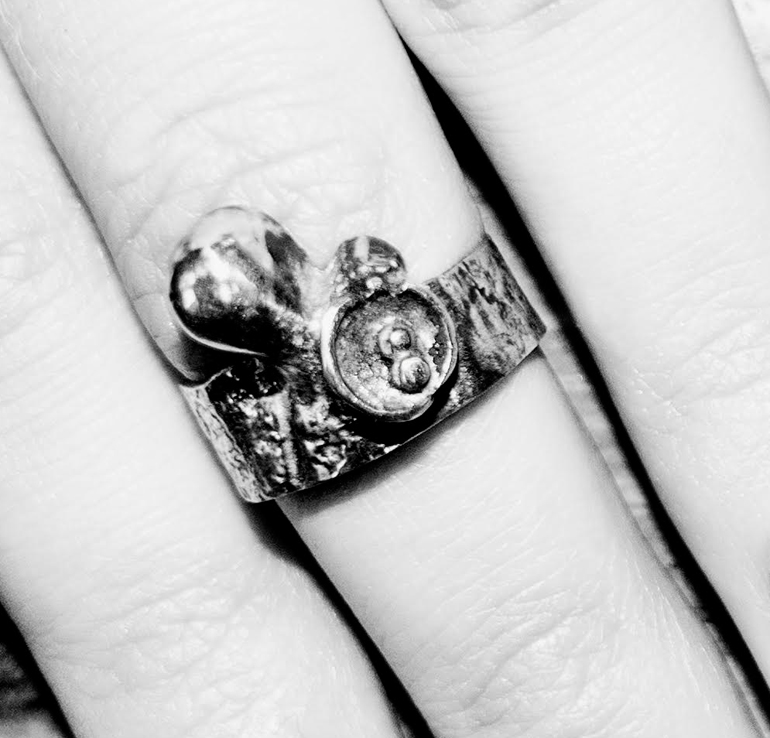 Man and clam ring – Another sea succulent , one not only provides tasty treats, but the much coveted pearls., look after our sea life humans.  This is a strictly one off piece.
Little love collection 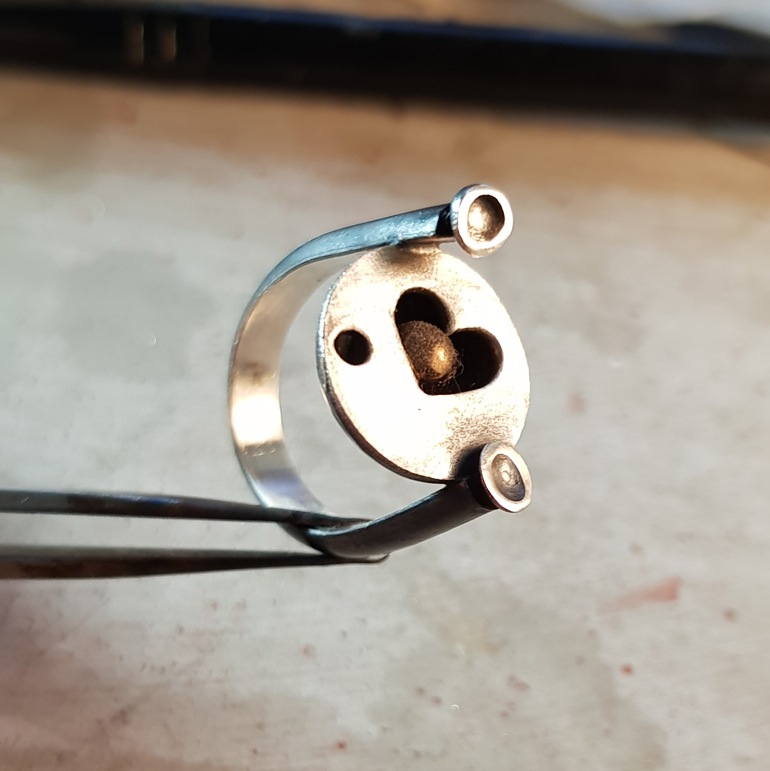 This is my first jewellery collection in a while,  forgot how much I love making stuff, commemorating that love with a heart ring, in solid blackened and satinised silver, it covets a gold hematite bead inside <3 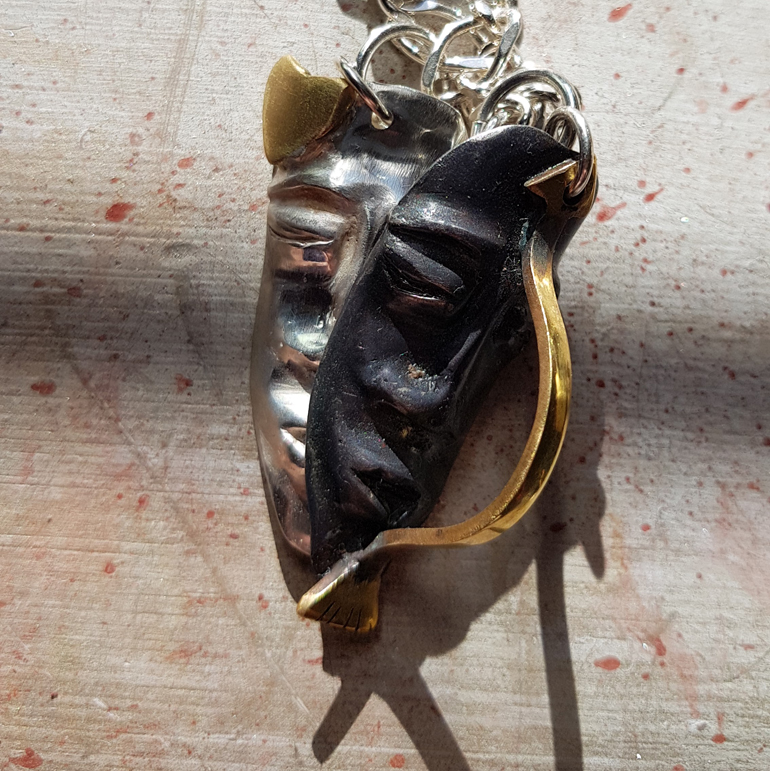 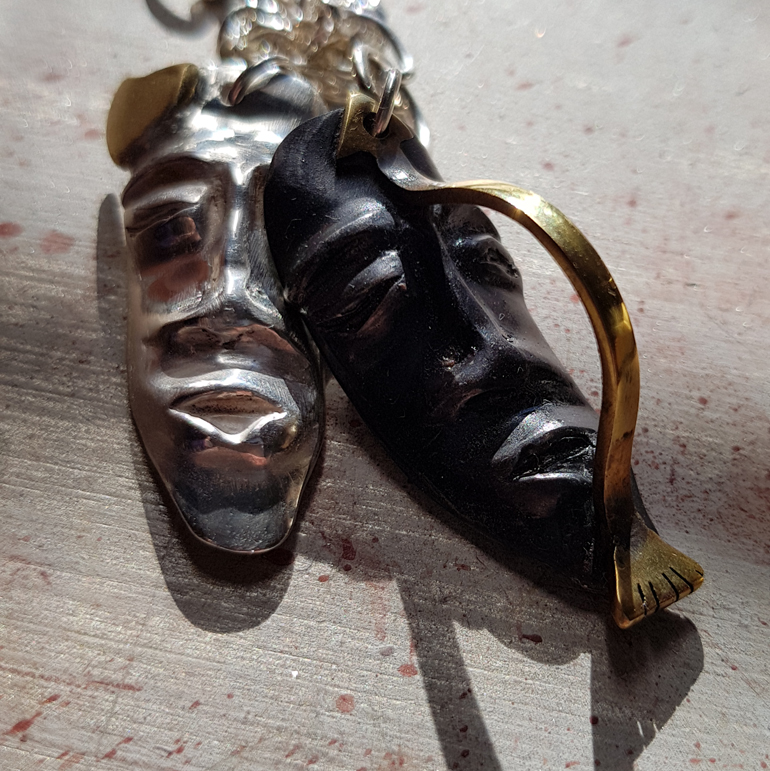